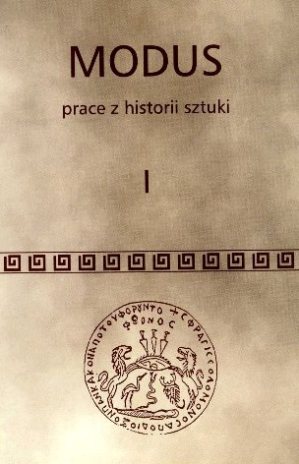 In past few years there was no new issue of "Prace z Historii Sztuki" in the "Jagiellonian Uniwersyte Scientist's Works". That is the reason why Jagiellonian University Institure of Art History releas the new journal entiteled "Modus". To keep track of previus series we use as a subtitle the previus name.

The Journal is open for all papers form history of art, cultural history, architecture, design and many more; it publishes longer dissertations, articles, book reviews and miscellanea of ​​scholars connected with the Institute and authors from all Polish and foreign art history centers. The main language of the journal was Polish, but texts in congress languages ​​(English, German, French) are also published.

The journal’s connection with the Institute of Art History is emphasized by publishing teh Chronicle of Institute, which brings news about scientific events, personnel changes and MA and PhD theses.

Wilpert, referring to the six pre-Constantine sarcophagi published by him, interprets the representations of lions decorating the tombs as symbolic depictions of the Devil. The sarcophagi mentioned by him, which are kept in the Louvre collections (fig. 1), S.Trinita Church in Florence (fig. 2), S. Saba in Rome, Museum at Tipasa (fig. 3), and Museo delie Terme in Rome (fig. 4), continue to function in the literature as Christian monuments dating from the 3rd century. Wilperfs thesis concerning the significance of the lion motif, albeit correct, has not been sufflciently justifled - the German scholar refers solely to St Paul's words (IPet. 5,8). The aim of the present paper is to supplement Wilperfs argumentation.

As has been repeatedly emphasized in the relevant literature, Early Christian sarcophagi constitute both stylistically and iconographically an integral part of the heritage of the late-antique, pagan Roman workshops, embracing a relatively numerous group of objects in which the lion motif is universally interpreted as a symbol of death (flgs 5, 6, 7). This fact induced some researchers to content themselves with the recognition of such symbolic significance of a lion on Christian reliefs.

However, in the Christian literature of the first centuries, referring to Biblical tradition (e.g. Pss. 7, 2-3; 21, 13-14, 21; Jer. 50, 17; Ezek. 19, 3-7; Amos 3, 12; 2 Tim. 4, 17; IPet. 5,8), a lion is generally identified with evil and sometimes even directly with the Devil (Eusebius of Caesarea, Irenaeus, Justin, Clement of Rome, Tertullian, Origen), this confirming Wilperfs interpretation. Also death is regarded by Early Christian writers as the work and one of the names of the Devil (Justin,Clement of Alexandria, Origen), which in turn encourages the supposition that the Christians may have associated the lion - a pagan symbol of death - with the Devil.

The German researcher's thesis finds additional corroboration in the appearance in Early Christian iconography of other compositions in which a lion unequivocally symbolizes evil or the Devil (flgs 8, 9, 10, 11 - objects dating from the 3rd-6th centuries). The lion on the pre-Constantine Christian sarcophagi is a symbol which took form under the influence of Christian and Late Roman pagan traditions, the two descending from the same sources of ancient Mediterranean culture, which are inseparable. The interpretation proposed by Wilpert is correct, but it is not the only one, hence the necessity of extreme caution in drawing a conclusion from the considerations presented in the paper: it is possible that the Christians of the 3rd century, ordering sarcophagi with a relief whose composition was popular among their pagan fellow-citizens, regarded a lion not only as a symbol of death but also as that of the Devil.

Summary
The collections of the bishop's pałace in Cracow include the picture Crucifixion with SS Jerome and Francis, an unknown work by the Maestro del Tondo Borghese, an anonymous Florentine painter who worked at the turn of the 15th and 16th centuries in the circle of Domenico Ghirlandaio and Cosimo Rosselli. The Cracow picture reveals direct links with the Maestro's work The Crucifixion with SS John the Baptist, Jerome, and Cosmas and Damian in Sant' Ambrogio, Florence. In both paintings can be discerned some elements derived from Domenico Ghirlandaio's art, but interpreted in a dry, linear, archaized manner.

In respect of iconography, the painting takes up the imitatio Christi theme. In presenting the crucified Christ the artist emphasized His dual naturę and brought into prominence the bleeding wounds, drawing his inspiration from the theology of St Thomas Aąuinas, while artistically he referred to Fra Angelico's frescoes in the Convent of S. Marco in Florence. The presence of a pair of saints adoring the Crucified Christ in the Cracow picture is justified by their characteristic devoutness and their idea to imitate Christ. Jerome doing penance is a spiritual mirror of the suffering Christ, while the lion seated beside the saint denotes the taming of the beast in man. St Francis is an extreme example of imitatio Christi; in the religious sense Jerome is the ideological ancestor of Francis. The presence of the two saints in the Crucifixion scene signifies a return to the idea of apostolic poverty, renunciation of worldly goods and, conseąuently, of secular culture. The Cracow picture illustrates changes in the religious approach in Italy, following the current of religious spiritualism - a reaction to the moderate reiigiousness of humanism. In the extreme manifestations of renouatio in the Church of that time (Savonaroła's preaching, ideas professed by the Hieronymites), any possibility of linking Christian thought with the antiąue tradition is denied.

The Cracow work of the Maestro del Tondo Borghese expresses the ideas of renouatio influenced by the Savonarolan movement of the actualizing dimension of a religious propaganda. This is an example of popular art intended for private devotion, whose archaized form seems rather odd in the High Renaissance period.

Summary
„The Group of Five", many years later dubbed the Nowa Huta Group, was one of a few such groups, social-artistic in character, that sprang up in Cracow after World War II. Its members were Danuta Urbanowicz, Witold Urbanowicz, Jerzy Wroński, Julian Jończyk, and Janusz Tarabuła. In addition, Barbara Kwaśniewska, Lucjan Mianowski, and Jerzy Kałucki participated in five of the Group's shows. What basically bonded these young artists was the atmosphere in their common studio at the Cracow Academy as well as their desire to oppose the hitherto- obtaining standards and models, above all Socialist Realism and Colourism.

Among the functions which at that time were ascribed to avant-garde formations their expansive activity came into prominence. However, in the case of the group discussed here this factor was manifestly ignored - their exhibitions never went beyond their milieu, art critics did not keep pace with them, and the older artists from the Cracow Group, engaged in their mounting, were not particularly keen on backing up the activities of another, not self-reliant formation. As a result, the artists of what after many years came to be called the Nowa Huta Group, in its origins going back to 1956, in March 1961 joined the Cracow Group. The postulate dominating the group's programme laid down on the occasion of the II Group Show was to enrich the painter's materials. Each artist approached the problem differently, but all of them unanimously repudiated the interpretation of their creations solely from their formal and aesthetical aspects. Among the major ideological threads running through matter painting created by the representatives of this formation the problem of anamnesis comes to the fore, chiefly relating to their childhood experience and to visual impressions from the places of particular importance to the artists. In addition to artistic fascinations, it is worth noting their idea of creation in Cracow of a new cultural periodical entitled „Sketches", of which a single number came out in February 1956, and also their participation in the productions of the „Widzimisie" („Whim") Puppet Theatre in Nowa Huta from the end of 1957 to May 1960.

Summary
The present paper takes up the ąuestion of appropriations in paintings by Tadeusz Kantor. A appropriation is understood here as any form of using a pre-existent artistic structure, such as a work of art or its fragment, the style of a certain epoch, milieu, or school, an individual manner, and the like. With one reservation: this employment should be intentional, that is, the artist should be fully conscious that the source will be identified; what is more, he makes the identification an essential element of perception of his work. Analysis of aappropriations is a starting-point for considerations of the character of relations between Kantor's oeuvre and the currently obtaining paradigms of art - traditional, avant-garde, and post-modern.

In the artisfs ąuotation-based production two stages have been distinguished. The first is connected with the idea of the lowest-rank reality and is mainly represented by a group of museum emballages. At this stage, in accordance with what Kantor declared then, a appropriation in his works is treated on a par with any other object used by him - as a ready-made, a found object, a ready-made reality object. The second stage is linked with the concept of the past as a sole concrete reality, being represented by a cycle of pictures entitled „Dalej już nic" (Further Nothing More), created in the last years of the artisfs life. Quotations from Old
Masters cease then to function as one of several versions of a ready-made, being given a particular privilege in the space of a work of art, due to their belonging to the sphere of memory.

Museum emballages are those works in which there appear some borrowings from of the Velasquez portraits of the Infanta Margareta and from Goya's painting Execution of the Madrid Insurgents. These appropriations are juxtaposed with elements of the lowest-rank reality, in this case bags and other wrappings. The function of wrappings (emballages) in those works is ambivalent - on the one hand they serve to compromise the museum prestige of the originals, but on the other aim at protecting a great cultural value (represented by these pictures) against its depreciation.

In the „Dalej już nic" (Further Nothing More) cycle Kantor returns once again to the above-mentioned paintings of Velasquez and Goya, situatingthem, however, in a different context. The artist is no longer preoccupied with the wrapping of these historical portraits, but incorporates them in the ilłusionistic space of his work, together with other cliches ofmemory (imperfect and variable images of the past). The Infanta and the Napoleonie Soldier function in these pictures in two ways: as ąuotations from the Spanish masters' oeuvre or, on another occasion, as self-quotations, a reminder of the museum emballages of the 'sixties.

Despite the differences between the appropriations present in museum embal lages and those which appear in the last stage of his creative activity, these ąuotations are in large measure an expression of one and the same artistic strategy, whose characteristics are as follows:

- the relation between an original and a work of art referring to it is freąuently
used as a generator of important meanings,
- the model is treated with nonchalance and subjected to considerable modifications,
- quotations are deliberately isolated from the remaining elements of the reality
of a work of art, this, conseąuently:
- leading to a change in the structure of a work of art: a coherent whole breaks up
into a number of alien and incongruous fragments.

For the above reasons Kantor's appropriations have little in common with traditional (pre-modern) ways of referring to the art of the predecessors. As regards the relationship of this strategy with the avant-garde or post-modernism, everything depends on the researcher's standpoint. In the present paper Kantor's quotation-based output is compared, for instance, with Greenberg's model of an avant-garde work of art, with a post-modern nostalgia as seen by Guy Scarpetta, and with post-modernism in the concept of Robert Rosenblum (and in those akin to it). However, owing to a multitude of freąuently contradictory connotations of these concepts (avant-garde and post-modernism), Kantor's ąuotation cannot be classified unequivocally. Nevertheless, the author indicates some points in common linking the artisfs ąuotation method with the concepts constituting a permanent element of a post-modern discourse.