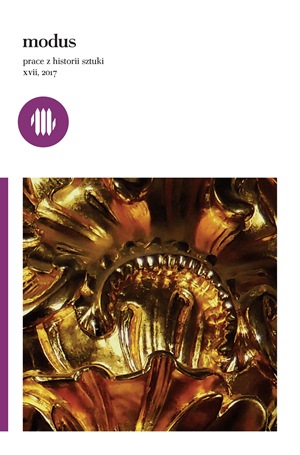 Vidi coelum novum et terram novam. The Chapel of Our Lady ofMount Carmel at Frydman: The Meaning and Origin of Forms

The paper deals with the chapel located by the parish church in Frydman in the Spis (Scepusium) region, founded by the local parish priest Michał Lorencs in 1764. The interior of the octagonal building, is fitted with a homogeneous set of furnishings consisting of a centrally located two-sided retable surmounted by a uniąue shrine in the form of a glazed star, and numerous wooden sculptures decorating niches in the walls.

The chapel used to be a pilgrimage site and became the founder s resting place. The paper discusses the history of the chapel, the religious and political context of its foundation as well as problems explored in earlier studies, both popular and scholarly ones, with special attention deyoted to the article by Jan Białostocki and Adam Miłobędzki, from 1957, that has seryed as a crucial point of reference in the existing interpretations of the chapel. Further, the article attempts to elucidate the still unresolved problem of the origins of the chapels plan and forms of its retable, pointing to the traits they share with the sacred architecture of pilgrimage sites, particularly shrines. The Chapel of the Holy Shroud in Turin has been suggested as the closest counterpart for the Frydman chapel as far as its architectural plan, the retable type and the way of displaying relics are concerned. The soft, flowing lines of the a-tectonic forms of the retable, in turn, seem to resemble South-German small-scale architectural church furnishings from the mid-eighteenth century.

As far as the message carried by the decoration of Our Lady of Mount Carmel Chapel is concerned, selected Old- and New Testament figures, depicted in the retable and wali niches, have been identified, and particular themes represented in the above decoration have been determined. The first, sepulchral, theme is manifested in the unmarked burial site of Father Lorencs, located ad sanctos, in the immediate proximity of the relics of catacomb saints. The next, Carmelite, theme is related to the Scapular Confraternity that had been associated with the chapel and church. The paper discusses also the Marian symbolism of the chapel, already explored to some extent in earlier literaturę, and its prominent Christological and Eucharistic themes, which have hitherto not been adeąuately examined. In conclusion, Our Lady of Mount Carmel Chapel is considered as a symbolic representation of the Heavenly Jerusalem and a powerful profession of faith in the intercession of saints and the Virgin Mary before God.

więcej o Vidi coelum novum et terram novam. The Chapel of Our Lady ofMount Carmel at Frydman: The Meaning and Origin of Forms

The present paper is intended as a summary of known facts about Antoni Rarogiewicz, a woodcaryer from Przeworsk. Supplemented with recently discoyered information, the paper presents an outline of his career which may serve as a point of departure for a more detailed inyestigation into the woodcaryer s life and work.

Until now the basie information on Rarogiewicz could be found in “The Dictionary of Polish Artists”, which, in the light of documents surviving in the Archiyes of the Polish Province of the Obseryant Franciscans [Bernardines] in Cracow, requires amendments (mainly as far as the dates of the woodcarver’s engagement in the Obseryant Franciscan church in Przeworsk are concerned). Apart from an analysis of Rarogiewiczs work for the Obseryant Franciscans in Przeworsk, the paper puts together archiyal information on his social actiyities, such as his contacts with the Przeworsk woodcaryers’ guild and his membership in the ‘Gwiazda’ association of craftsmen in Przeworsk. The biography of the artist and outline of his career have been supplemented by a presentation of a collection of his drawings recently donated to the Museum in Przeworsk by his heir, Jan Burnat.

Unknown Primary Source Materials Related to the Wojtych Family of Gardeners in the Service of the Potockis of Krzeszowice, in 1831-1927

The article presents unpublished primary source materials from the holdings of the Cracow branch of the National Archiyes, the Garden Papers of the Wojtych Family from Krzeszowice, 1831-1927. The main document in the collection, the Family History, was written down by Jan Wojtych (1865-1942) in 1924. It chronicles the work of three generations of a family of gardeners, over a span of almost a hundred years, whose members in succession were in the seryice of the Potockis from Krzeszowice tending their gardens. The oldest member of the family, Franciszek, became the main gardener in the Krzeszowice estate of Count Andrzej Potocki on the strength of a contract signed on i January 1832. He brought numerous alterations into the grounds, starting, for example, the cultiyation of lemons and oranges, previously unknown in the area. He was supposed to begin the development of a landscape garden in the yicinity of the new pałace, which was eventually completed by his son Adolf, who had been working along with his father sińce 1849. Franciszeks successor was trained in the Jagiellonian Universites botanical garden in Cracow and in the famous nursery in Medyka.

Particularly interesting are archiyal materials attesting to Adolf s education and training as gardener in the most important nurseries in Europe. Before taking his post at Krzeszowice, Adolf trained in Penzing, Vienna, Brunn am Gebirge, in Emil Liebigs company in Dresden, in the higher school of pomology - the Pomologisches Institut in Reutlingen in Wurttemberg, in the Platz & Sohn company in Erfurt, at the Ecole d’Horticulture de Versailles in Paris, and at the Horticulture Internationale in Brussels. The documents preseryed in this archiyal collection are a yaluable source of information on the high level of expertise of gardeners employed by an aristocratic family.

więcej o Unknown Primary Source Materials Related to the Wojtych Family of Gardeners in the Service of the Potockis of Krzeszowice, in 1831-1927

The present paper is an attempt at showing the inspiration drawn by contemporary art from Aby Warburgs Mnemosyne Atlas, compiled in the 1920S. These influences will be exemplified by the work of Goshka Macuga.

The interest of the artist in the German art historian has been constantly manifested in a direct manner: her installations or collages feature photographic images of the scholar or the objects of his research. Worthy of mention is also the trip that Macuga undertook retracing Warburgs expedition to study the Hopi Indians. On closer inspection, Macugas work shows that these inspirations reach much further and are manifested also in the message carried by her works, reflecting the practices used by Warburg while compiling his magnum opus, the Mnemosyne Atlas. The basis for an interpretation of black-and-white plates, applied in the present paper, was the work of the French philosopher Georges Didi-Huberman who not only has contributed crucial texts on the contemporary reception of the Mnemosyne Atlas, of key importance for the present discussion, but has interpreted Warburgs oeuvre in a practical manner as well. The exhibition, Atlas: How to Carry the World on Ones Backl, curated by him, is the hitherto most extensive direct reception of the Mnemosyne Atlas.

Formal references to Warburg s Mnemosyne Atlas in Macugas work were never intended to be as straightforward as in the case of Didi-Hubermans work. Yet, a detailed analysis reyeals that a resemblance of certain features cannot be accidental. Anachronisms, the lack of hierarchy of the compared elements, no real between the materiał and metaphysical worlds, and an attempt at finding a certain uniyersality in the real world are just a handful of such similarities. Together they contribute to Goshka Macugas artistic practices being an alternative for a traditional archiyal research.

New Information on the Gothic Phase of St Giless Church in Cracow. A Short Notice on the Results of a Preventive Archaeological and Architectural Investigation

In April 2015, a preventive archaeological and architectural inyestigation, preceding the planned renoyation and installation of an under-floor heating system, was carried out in St Giless church in Cracow. The scope of the inyestigation included smallscale test holes in the churchs floor, and was subject to the Schedule of the heating system installation. Despite these constraints, the inyestigation has brought new information on the appearance of the church in its Gothic phase. Among the most important findings was the discoyery of remnants of a central pier of the Gothic nave whose presence has hitherto been a matter of conjecture.

This finding assigns the fourteenth-century church of St Giles to a numerous group of two-aisled Cracow Gothic churches, nowadays usually rebuilt or no longer surviving, whose construction has been conyentionally associated with the royal building lodge of King Casimir the Great. It has been established that the pier had an octagonal plan and its placement with regard to the walls of the nave and the location of the buttresses conditioned a particular construction of the yaulting. No remnants immediately related to the alleged earlier, Romanesque church, whose existence is known from primary sources, have been found. It has been established, however, that in the period before the construction of the Gothic church, a cobblestone surface, located about 90 cm below the present floor level, had existed within the present nave and had been used for an extensive period. It was from this level that the pier of the fourteenth-century church was raised. It has been also recorded that the occupation level of the Gothic church was barely a dozen centimetres lower than the present floor level, created at the beginning of the twentieth century. The remaining findings revealed fragmentary information on the foundations of the Gothic nave and on the transformations of the church in the early modern period, thus supplementing the current State of research and making it possible to specify objectives for future research.

The 80th anniversary of the birth of Professor Adam Małkiewicz

On March 4, 2016, an unusual ceremony took place at our Institute - the 80th anniversary of the birth of Professor Adam Małkiewicz. At. 16:30 in the Hall Karol and Lanckoroński 's staff gathered at the Institute, Students, PhD Students, Students and Co - workers of the Professor, as well as numerous representatives of the University' s authorities and cultural organizations associated with the Krakow art history. The ceremony took, among others participation His Magnificence Rector of the Jagiellonian University prof. Wojciech Nowak together with the Vice-Rector of the Jagiellonian University for research and structural funds prof. Stanisław Kistryne, Dean of the Historical Department prof. Jan Święch and vice-dean of prof. Stanisław Sroka, as well as the Director of the Institute of the History of Art and Culture of the UPJPII prof. Kazimierz Kuczman, President of the Krakow Branch of the Association of Art Historians, Joanna Daranowska-Łukaszewska. The whole ceremony was honored by the performance of the Jagiellonian University Choir Academic Choir.

Not accidentally, the jubilee part of the evening was preceded by the promotion of the book "Collegium Iuridicum" by Stanisław A. Sroka, Marcin Szym, Andrzej Betlej, Agata Dworzak and Wojciech Bałus, published as part of a series of monographs of historic buildings of the University. Professor Adam Małkiewicz is particularly connected with the building of our Institute, because in 1986 he was appointed to the senior of the building, thanks to which he was responsible for the comprehensive renovation and tedious process of renewal of one of the oldest buildings of the University. Thanks to His dedication and dedication, as well as the knowledge of renovation, Collegium Iuridicum allowed me to move here from Collegium Maius in 1992 to the Institute of Art History.

więcej o About the Authors